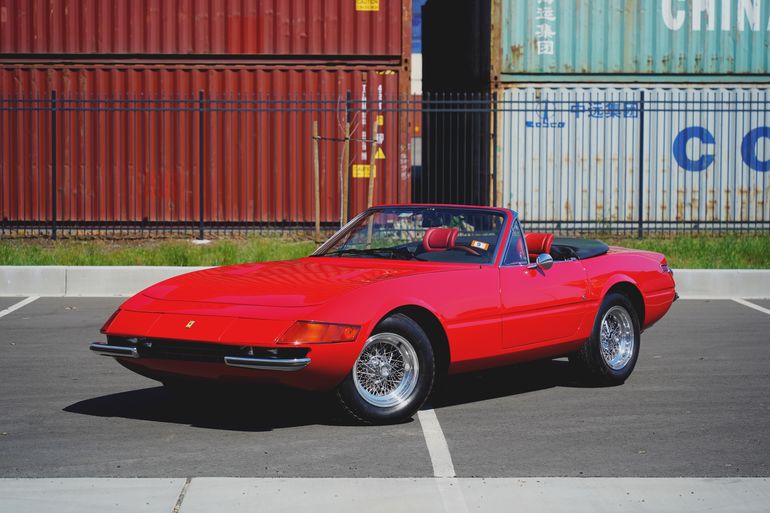 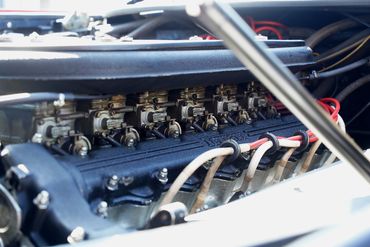 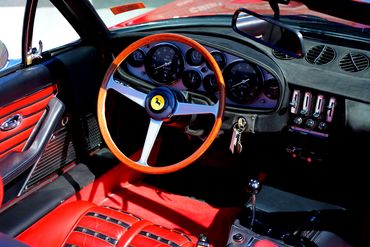 Upon its debut at the 1968 Paris Auto Salon, the Ferrari 365 GTB/4 appeared as a revelation of design and engineering. It was just in time. Ferrari needing to re-establish their leadership position against growing and formidable competition, Leonardo Fioravanti of Pininfarina delivered a chiseled fresh body design with crisp defining lines and sweeping elegance, placing Ferrari substantially ahead of other sports car manufacturers. The new 365 GTB/4 was a crucial effort for Ferrari, replacing the aging 275 GTB/4 which had already succumbed to slow sales. Although concurrent with mid-engine development for future Ferraris, the Daytona would be the last of the sanctified front engine V12 models for many years to come.

Beautifully appointed and exclusively priced when new, the “Daytona”, as it ultimately became known due to the famed 1-2-3 1967 24 Hours of Daytona Ferrari finish, would become a fixture of Hollywood movies, record album covers, and magazine articles. Outfitted with the 4.4 Liter Colombo, quad-cam V-12 engine, fed by six dual-throat Weber carburetors and 5-speed gearbox, the Daytona delivered a commanding 352 hp in stock trim with a top speed just over 170 mph. The beautifully sculpted Daytona offered fantastic performance and touring capability in a remarkably agile package. With a mere 1,400 produced until 1973, the Daytona was also available, in very limited numbers, as a Spyder. Assembled by hand at Scaglietti, factory built Spyders are rare today and highly prized by collectors all over the world. As early as the late 1970s, qualified coachbuilders in the US and Europe transformed coupe model Daytonas into the Spyder configuration. Although the quality and construction of these post-factory Spyders varies from builder to builder, the cars themselves serve as excellent guides to the fidelity of the original design. Each of the features and level of build are distinguished when observing the conversion methods and processes that make up the final car.

According to Ferrari Market Letter (H. Raab “Ferrari Serial Numbers Part 1, 2nd edition) reference information, this Ferrari Daytona was assembled as a factory Coupe and prepared for US delivery with assembly sequence no. 445, body no. 454, and fitted with air conditioning from the factory. According to Ferrari Circolare Technica, No. 174 the car was delivered to Modern Classic Motors, Reno, NV where it was sold to the first owner. In 1982 the car was offered by Bob Norwood, Autocraft, Dallas, TX. At that time, the car was painted red with a black interior and 22,306 miles were indicated. The car was next offered in 1983 by Don Walker, Dallas, TX. At that time the car featured red seat inserts and alloy wheels. In June 1987 this Daytona was offered by Ron Spangler of Prancing Horse Farm, Maryland. This is the first advertised indication of the car offered as a Spyder conversion. Subsequent future offerings of the car were then presented by various dealers suggesting that the car had been converted by Scaglietti, possibly for Al Guggisberg. No records were available to support that claim, and none have surfaced at this time documenting the claim of Scaglietti construction.

In January 1998, this Daytona was offered at auction with 22,539 miles, then described as having been converted to Spyder configuration by Straman, although without documentation to support Straman’s conversion. Subsequent sales followed including 2002 by Bobileff Motorcar Co, San Diego, CA. Shortly thereafter, in 2007, the car was in Chicago, IL with Richard Gammonley who reportedly restored the car including fresh red paint, a new red interior with black seat inserts and black carpets, and a full chassis rebuild by John Hajduk. In 2010, Fantasy Junction offered the car for sale. The current owner purchased this Daytona in 2015 with mileage indicated at 34,621 at the time of sale. The odometer currently indicates 35,104 miles.
Although records supporting the conversion from coupe to Spyder configuration are not currently on hand, the build quality combined with the 2007 restoration efforts performed are both representative of consistent high-quality workmanship to correctly create a very accurate Spyder. The windshield frame has been correctly finished around the perimeter, the rear fender lines are properly sculpted, the trunk construction is very well done, and the convertible top fits snugly to the windshield frame. Of additional interest, this car has retractable windshield sun visors similar to the factory built Spyders – a nice touch seldom seen in other Spyder conversions. This Spyder conversion is also outfitted with a very nicely constructed rear tonneau cover that finishes the rear deck area with excellent black material tailored perfectly to fit the contours of the rear fenders and surrounding rear bulkhead. The car has been updated with a modern hydraulic power steering unit.
Today this Daytona Spyder conversion presents in excellent condition, still reflecting low miles and modest use under current ownership. The current owner, a multiple vintage performance car collector and enthusiast has properly maintained the car including recent services. The paint, though applied fifteen years ago, still retains a very smooth and glossy finish, while the detailing throughout the exterior indicates high quality workmanship evident on all surfaces. The various exterior trim and emblems are beautifully finished, including crisp body line detail, nicely finished door jambs, detailed inner jambs and underside hood/trunk surfaces. Chrome and polished metal finishes are also in excellent condition. All openings function as expected with tight closures and excellent panel gaps to the doors, hood, and trunk. All four Borrani center hub wire wheels are polished and fitted with correctly sized Michelin XWX 215/70 VR15 tires.

The interior is finished in red and black, combining leather and synthetic surfaces including beautifully finished red Daytona seats with selected black perforated banding decorating the seat inserts. The stitching and bolster structure are both excellent and deliver a striking visual presence to the commanding interior. The dashboard is in excellent condition, accented by beautiful instruments, aluminum trim, preserved factory correct switches, and a delightful three spoke wooden steering wheel with central Ferrari logo. The factory air conditioning controls are correct and the unit functions when activated, however the air does not blow cold. The black leather console and door panels are taut, showing excellent fit, crisp corners, and very good stitching. The red carpeting is in very good condition, creating a handsome contrast to the black material features. The interior presentation is very handsome overall with a cohesive high-quality feel to the materials and finishes. Another rarely seen detail is the addition of retractable “pull down” sun visor screens, which closely replicate original units installed on factory constructed Spyders.

The engine bay and engine have been correctly prepared and properly detailed to a high standard. Per construction consistent with factory coupes, the car retains factory fiberglass inner fender wells. Restored finishes appear to have been correctly applied and properly cared for under current ownership. There are mild indications of age on some of the engine components, lines, and hoses but nothing to detract from a very pleasing impression both in the engine itself and the surrounding engine compartment details. The traditional Ferrari crinkle-black quad-cam cover finish has been faithfully presented, the diamond tufted silver hood insulation pad, proper engine compartment plaques, factory hardware, and hallmark V12 designations are all beautifully presented and correct. The trunk compartment is finished off with black carpet, concealing a fifth Borrani wire wheel and matching Michelin XWX tire.

The underside of the car shows excellent detail and tidy finishes with focus on authenticity and cleanliness. Though not finished to concours level, the car is outfitted with correct exhaust and mufflers terminating with ANSA branded quad tips. Underside features include proper raw aluminum engine and gearbox castings, correct lines and finishes, and orange Koni shock absorbers. The chassis is clean and dry, showing no visual evidence of structural damage or compromise to main components, rocker panels, or suspension.

The car starts on command, humming a crisp and rewarding V12 idle. The dogleg 5-speed moves smoothly through the gated selector. There is some tappet noise evident, and the carbs would likely benefit from tuning, but once on the secondaries, the engine makes good power, and the car pulls well. The added modern power steering is a welcome addition to the driving experience, particularly in tight parking conditions.

Beautiful by any measure, iconic for its ground-breaking design, and revered today as a hallmark of Ferrari excellence, a factory constructed Spyder is both rare and challenging to obtain, making a well-constructed conversion a very attractive opportunity. Accompanied by a car cover, wheel spanner, and mallet, this Spyder conversion offers all the joys of open motoring in a fantastic V12 powered Ferrari capable of delivering all the engaging passions of front engine Italian sports car driving. 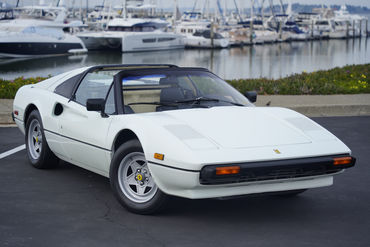 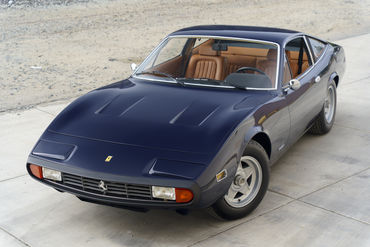 Bring a Trailer Preview: One of the finest examples in existence.