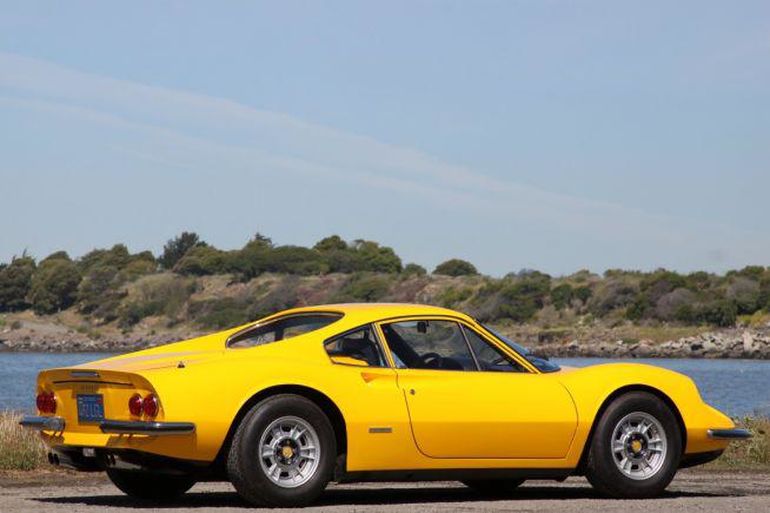 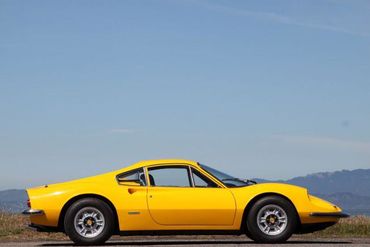 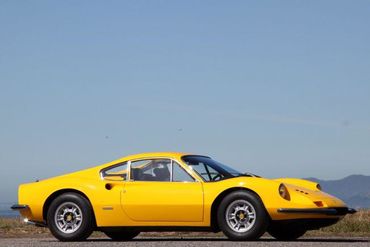 Named for Enzo Ferrari's son, Alfredino, who died in 1956 at the age of 24 as the result of muscular dystrophy, the Dino was, fittingly, a 'baby' Ferrari that was dimensionally smaller and more nimble than any other street Ferrari. Its mid-placed engine was a Ferrari first for a street car, and the engine itself is a gem: a lovely quad cam V6 that reflected the lessons learned from producing V6s for Dino race cars like the 206 SP. The styling for the car was done by Pininfarina, and remains to many one of the most beautiful and exotic Ferraris of the period. Certainly the view from the driver's seat over the two prominently curved fenders is one of the most evocative streetgoing driver's seat views.

This particular car is a truly exceptional 3-owner blue-plate example that was sold new in California and has remained here since. Originally supplied by the Bill Harrah’s distributorship Modern Classic Motors, the car was equipped with factory air conditioning and electric windows. The car was sold new on 6 August 1973 to a resident of Studio City, California and its first owner serviced the car consistently for the duration of his 6 year ownership exclusively at Modena Sport Cars in Hollywood, California. He retained the car until September of 1979, selling it for $19,000 to its next owner, a Doctor Lambert in Santa Barbara who kept the car for 26 years and also owned one of the approximately 50 330 Americas built. Service records from both of these owners are included, dating back to 1974 when the car was serviced at 5,062 miles. It was regularly serviced several times a year, and was driven quite regularly during this period, accumulating 49,000 miles by the time it was sold to its second owner. He covered another 18,000 miles and set about performing a concours level restoration when the car had 67,000 miles in 1985. Throughout this period, the car was serviced by Modena Sport Cars, who looked after the car until 1994.

The restoration included an engine rebuild, new clutch, new water pump, rebuilt starter, rebuilt alternator, rebuilt transmission and differential, new paint, new chrome, and new interior. The mechanical work was performed by Modena Sport Cars, the same shop that had been maintaining the car since it was new. The restoration was completed in mid-1986 and the car covered about 6000 more miles over the next 19 years. Its current owner lives in the San Francisco Bay Area and purchased the car via an ad the Ferrari Market Letter on 12 June 2005 with 73,844 miles, following a very complimentary inspection by Geoff Provo of GP Enterprises. In the last ten years, the car has covered a further 5,000 miles and has been regularly serviced including new rear Koni shock absorbers, correct new Michelin XWX tires, new fuel pump, new water pump, new thermostat housing and thermostat, rebuilt alternator, ignition service including points, condenser, distributor cap, rotor, ignition wires, and spark plugs. Regular fluid and filter services were also performed during this period.

The car is exceptionally complete with a comprehensive and fastidiously organized service file dating back to when the car had 5,062 miles in 1974. There are photos from the restoration as well, in addition to correspondence, carbons from various transactions, business cards, a great many old registration slips dating back to the 1970s, and miscellaneous notes and diagrams. The books set is exceptionally complete, with excellent original leather pouch, and many original books including owner’s manual, warranty booklet (still with most of the coupons), dealer directory, consumer information pamphlet, USA supplement, parts catalog, and chassis service abstract. There is also a reprinted service manual and the original jack. There are four boxes of miscellaneous spare parts including spark plug wires one Cibié headlamp, the original side reflectors, a water pump, smog equipment, various hoses and belts, a bra, and some touch up paint.

The car is cosmetically excellent, truly defying the age of the restoration. There is a handful of chips from road use, as well as three small stress cracks at the corners of the windows, but the paint is otherwise extremely fresh, with a presentation that could easily pass for a 5 year old restoration. The paint is glossy and was performed to high standards over a wonderfully straight and solid body. The chrome is very good to excellent with minor swirls and light pitting in selected areas. The lights and glass are very good to excellent, with a small amount of light road wear on the front windscreen. The car has Carello headlamps and the side reflectors were removed at the time of the repaint, although they are included with the car. The wheels are in very nice condition.

The interior is similarly nice with impressively supple leather that shows almost no wear. The dashboard was retrimmed to high standards in a non mousehair material. The instruments, switches, and gauges are in excellent shape and appear to be unrestored. Much of the vinyl interior trim also appears to be in excellent original condition, including the sills, center console, rear firewall, and door caps, all of which are of the correct material. The car has an aftermarket steering wheel. The carpets and headliner are in excellent condition and the dome light works.

The engine compartment is also in excellent condition, being impressively tidy and fresh considering how long ago the restoration was performed. It is generally quite clean, and very correctly presented, including the finishes and decals on the airbox, as well as the valve covers. It is well above average for a high end driver, and generally has a crispness that is more commonly seen in show cars. The trunk was retrimmed with high quality carpet, which is excellent. The front compartment appears as it should, with matching spare with correct hold down, very nice plastics (which are often damaged), correct windscreen washer bag, and nice fuse cover with intact decals.

The car runs and drives well. The motor starts easily and makes the lovely Dino V6 noise. The engine is well tuned and pulls cleanly through the rev range. The clutch is positive and the gearbox synchromesh is good. The steering and chassis work well and there is a pleasant, sporting, and evocative feel to the driving experience. The brakes are effective with good bite.

This is a truly outstanding opportunity to acquire a superbly documented 3-owner California car. Still registered on six digit blue license plates, this Dino is extremely complete and in excellent cosmetic and mechanical condition. It has service records essentially back to new, which show the fastidious and enthusiastic character of its owners. Wonderfully complete with books, jack (complete with plastic cover for the gears, which is almost always missing), car cover, miscellaneous spares, records, photographs and much other documentation, this car has a wonderful honest no-excuses character that is very difficult to find. 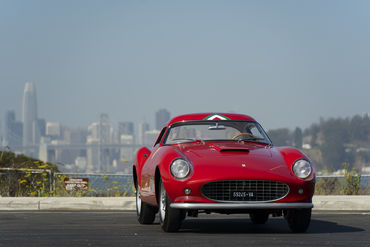