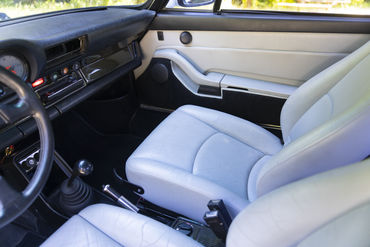 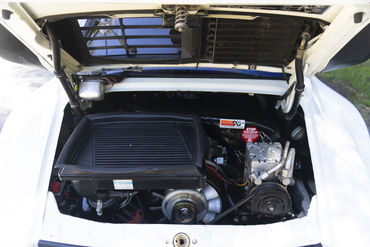 Although the Porsche Turbo is now a fixture of performance car buffs, it was nothing short of earth-shattering when it emerged in the mid 1970s. After massive success pioneering the use of turbochargers during the first half of the 1970s in the 917 Can Am and 911-based sports cars, Porsche delivered a reliable and capable turbocharged road car. The 930 was hugely impressive when new, offering astonishing acceleration and performance with deceptive composure – something seldom found in performance cars, especially in the 1970s. It was, by all accounts, a genuine contender for supercar status, placing Porsche in a whole new class of vaulted top-tier capabilities and signaling the beginning of Porsche’s offerings of high-quality cars with unbeatable performance.

Having accomplished so much in racing, the dramatic 935 had accomplished so much in racing, it was bound to have a lasting impact on production cars. Thus, the unique Slant Nose look emerged for road cars. These specially constructed conversions ultimately became so popular that even Porsche offered their own handmade version available under special order. With the low front profile and hidden headlights, the Slant Nose offered improved aerodynamics in addition to the visual exclusivity of these 935 inspired Porsches.

This Porsche 930 was built in February of 1979 and is now offered with a recent California smog certificate. The driver’s side door jamb shows the paint finish as 908-9-2 which converts to Grand Prix White, Porsche, Glasurit. Although early history of this car is not known it features a series of correct metal Slant Nose body panels which appear to have been professionally installed, consistent with non-factory installations that were performed by authorized dealerships or specialty shops. This car features rectangular headlights which are consistent with Alan Johnston installations performed using dual electric motors, one per headlight. Additional modifications performed under previous ownership includes a K&N air filter, an Infinity Basslink sound booster, Kenwood remote CD disc changer, and an aftermarket removable stereo head unit. Additional upgrades include a set of Kevlar dashboard inserts, Kevlar gear shift handle, an aftermarket leather wrapped Momo steering wheel, white face gauges, and a set of BBS wheels with Porsche center insignias.

Under current and consigning ownership, the car is known to have been in storage since 2010 and was recently serviced, totaling over $8,000.00, with attention to the fuel tank, which was drained, sent out for professional cleaning, and a new fuel filter installed. Further work included removing the rear axles, disassembling, and repacking with synthetic grease and installing new CV boots. All fluids were checked, oil and filter replaced, lower valve cover gaskets replaced, alternator and AC drive belts replaced, new Pirelli Rosso tires installed, and four-wheel alignment performed, a new battery installed, and other systems reviewed, and the owner advised regarding further suggested services. California State buyers should note that this car has passed a 2022 California smog test. A future California buyer is encouraged to maintain optimal tuning in preparation for further emissions tests.

Today this Porsche 930 car presents as a modified and upgraded car with enhancements performed under prior ownership. Although the car retains many of the original mechanical features, the paint has been repainted some time ago and is in very good condition. Numerous paint chips, cracking, and various scuff marks are evident on the front air dam and front bumper. The paint has good gloss, appears to match the original Grand Prix White as indicated on the paint code tag also consistent with the inner body panels. The body is straight and solid with good panel fit and operation. The trim and badges are in good shape, as are the lighting and unique slant nose vent trims. All glass panels bear the original Sekurit brand etch including the tinted windshield. The rubber is generally in very good condition including the whale tail material which is not warped or distorted from excessive heat exposure. The rubber bumper accordions, and black bumper strips are also in good condition. The basket weave BBS wheels are in generally good condition, with one showing curb rash. All four wheels have Porsche emblem canter caps. A set of Pirelli Rosso tires have been installed in June 2022 bearing 2021 date codes.

The interior currently installed with carbon trim is representative of use and some aging. The leather on the power adjustable seats shows wear, light cracking, though no tears. The black carpets show wear consistent with the age and miles. The dashboard has been upgraded with Kevlar inserts and white-faced gauges. The rear seating area and door panels are in generally good condition. The headliner has minor wrinkling to the area that covers the sunroof panel. The sunroof opens and closes via power switch. The dashboard is missing the main center air vent which fills the top center portion of the dash. Although the air compressor clutch operates when the AC controls are engaged, the air flow is slow and not cold.

The engine compartment appears unmodified and has not been restored. The engine exhibits evidence of typical age to the finishes but appears largely undisturbed and reflective of the miles on the odometer. The engine number, *6891147* is consistent with engines numbered in this series of 930 cars which line up with other known matching number sequences.

The trunk is essentially factory correct and houses a correct original Porsche spare wheel dated 3/79 consistent with the manufacturing period for the car. The front storage area contains two added stereo features, a Kenwood CD changer, and Infinity Basslink sound booster. Access to the smugglers compartment and VIN stamping are not possible without removing the mounting structure in place for the stereo equipment.

The underside of the car shows a dry original chassis with correct factory components and generally good care. There is no structural rust present and no visual evidence of compromise to the floor pan.

The car is offered with a car cover, a set of black Porsche crest branded floor mats, a Kenwood remote control for the CD changer, and a handful of select small parts.

This Porsche is also accompanied by what is believed to be the original brown interior including the following components: 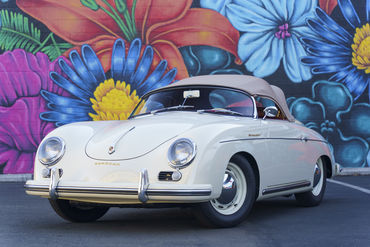 California car, purchased in 1974 by current owner, freshly and correctly restored in original colors by Speedster...

Bring A Trailer auction preview: Eligible for Le Mans Classic and for a growing list of other premier events worldwide....