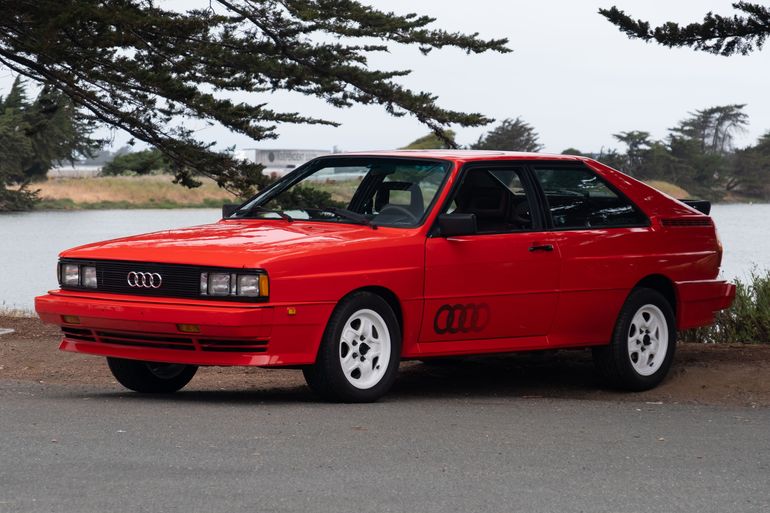 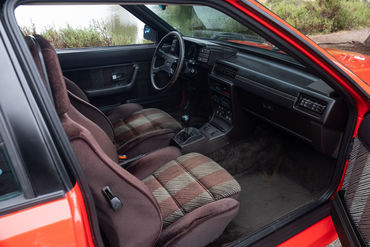 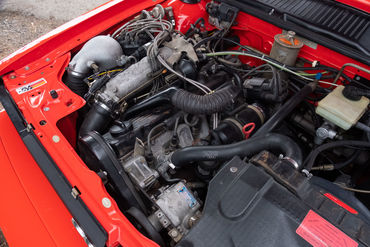 To Be Auctioned No Reserve on Bring a Trailer: Rare on US Soil, California CARB Compliant, Licensed, and Titled! Offered with NOS Original Wheels.

The Audi Quattro was developed to serve both road and rally purposes. Built with four-wheel drive to handle a wide range of road conditions, these first series cars are often referred to as the Ur-Quattro (first type). Originally launched in 1980 to European markets, the Turbocharged engine provided spirited performance resulting in rally victories while raising a great deal of interest from North American markets.By 1983 the Quattro was offered to US and Canada, but with production being largely hand-built, demand was limited by the high sticker price. Total sales achieved over the eleven-year production period was just over 11,000 units, making early Canadian and US examples very sought-after today, uniquely identified by larger impact bumpers. Regarded as one of the seminal “box-flare” designs of the 1980s, the Audi Quattro delivers all the punch and presence of a performance car from this period.

This Audi Quattro is one of 61 examples imported to Canada for the 1983 model roll out. A rare first year car optioned with sunroof and cloth seats, the original owner retained the car until August 1991, subsequently selling it to the next owner. Shortly thereafter, in 1997, the car was sold to an authorized Audi/VW repair shop in Victoria BC, then showing 265,714kms (approximately 166k miles). At that time the shop performed a comprehensive restoration including a rotisserie repaint along with the installation of an MC1 2.2L Turbocharged engine, replacing the standard WX type engine.After restoration, the car was primarily used for show until being sold in March 2009 to a client of the shop that performed the restoration. The next owner purchased the car in 2011, then showing 305k kilometers, returning it to the same shop for an additional $19,000 (Canadian dollars) in refresh work. In 2017 the car was offered at auction on BringATrailer https://bringatrailer.com/listing/1983-audi-ur-quattro-2/

Still retaining four binders containing service and parts records as well as original order and delivery records dating back to the original purchase, the current owner has made the car CARB compliant including up to date license and title in the state of California. Currently wearing a set of Alpine White Fuchs wheels, the current owner has sourced an impossibly rare unused set of NOS factory stock wheels included with the car. Under previous ownership the MC1 engine and K26 Turbocharger installation was performed by an authorized Audi service shop. The engine utilizes a Mac11e ECU with water cooling, an important feature that prolongs turbo life and eliminates the need to idle the engine for a minute or two prior to shut down. In addition to offering more power than the 2.1L WX engine, the MC1 engine has an anti-knock sensor which eliminates piston detonation. Other improvements include revised engine wiring and an under-hood fuse box, replacing the often-troublesome factory VW fuse box. A set of Toyo Proxes 225/50 15” tires were installed under previous ownership but still show ample tread remaining.

General mechanical condition includes smooth operating windup manual sunroof (also removable) which had an NOS sunroof seal installed in 2012. The air condition unit functions but does not blow cold, the rear defroster operates, both power mirrors function, the power windows operate up and down, and the radio gets power but does not function.

Overall, the cosmetic condition is excellent and impressive in person. The single stage Mars Red (LA3A Code G6) repaint was performed by Perfections Custom Paint and Autobody, Victoria, BC over ten years ago, but has held up very well retaining excellent gloss, smooth coverage, and nice detailing to the side vents, emblems, and fit lines. Panel gaps and closures are crisp and consistent with factory tolerances. The rear black wing is in very good condition with excellent consistent finish and no sun warpage. The glass, lenses, and emblems are also in excellent condition including the correctly applied, progressively fading quattro circles on the lower door panels. The interior of the car is in very good to excellent condition with only minor evidence of wear indicated in the driver’s seat. The dashboard, steering wheel, and other interior components, many of which are often warped or sun-damaged, are in very good to excellent condition.

The engine compartment and engine are in very good condition overall showing correct components and features per original specifications, accommodating the newer, more powerful engine with a correct factory appearance. The undercarriage appears to be largely original showing updates to suspension bushings, a Magnaflow muffler, and chassis subframe and suspension components which appear to have been refinished during the restoration. The underside shows no immediate visual evidence of structural compromise, further supported by the documentation and ownership history that has accompanied this car since new. 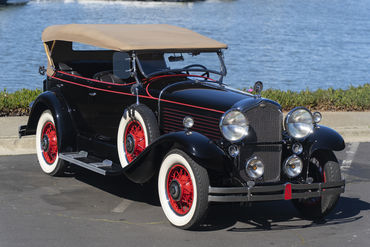