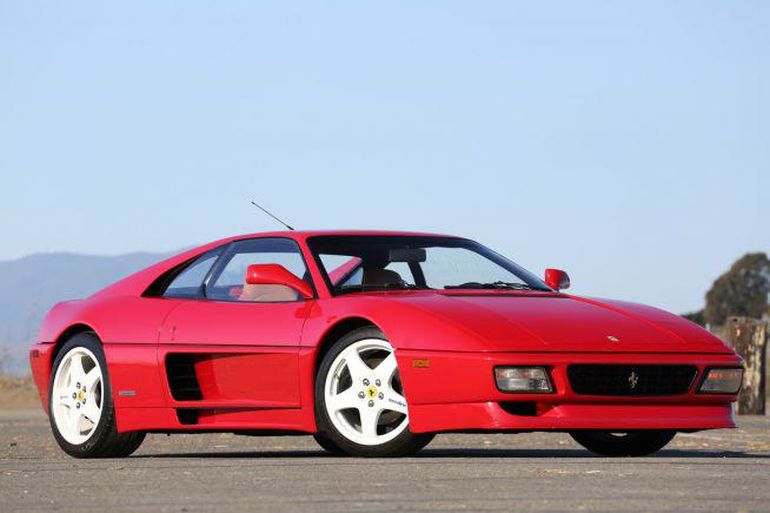 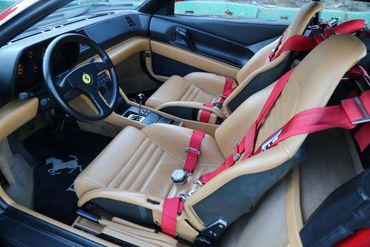 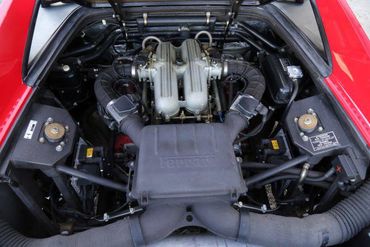 At the 1992 Los Angeles Auto Show, Ferrari unveiled the 348 Serie Speciale, a limited production performance-oriented variant of the 348. Offered exclusively for the American market, the Speciale was differentiated by a host of changes that transformed the character of the 348 to a remarkably visceral and focused machine. Between 1992 and 1993, a total of 100 Speciales were built, 65 ts (removable roof) variants and a mere 35 tbs (berlinettas with fixed roofs).

The ethos of the Serie Speciale was similar to that of the 348 Challenge, a series of spec cars used in the Challenge racing series. Every dynamic aspect of the Speciale was honed and tuned, and the net result of a set of apparently incremental changes is impressively comprehensive and quite different from the standard 348. The mid-mounted Tipo F119 3.4- DOHC 32-valve V8 was factory tuned and fitted with a freer-flowing exhaust system, which boosted total output to 312 horsepower. The power increase coupled with a shorter final drive ratio resulted in 0-60 miles times of 5.3 seconds. Further enhancements included revised suspension settings, Pirelli P Zero tires, and F40-inspired new front and rear bumpers, side skirts, and a wider rear track, increased by 50mm. The body was revised with new front and rear grilles (without horizontal slats in the back) finished with chrome prancing horse emblems, and unique taillights. Inside, F40 Kevlar bucket seats covered in Connolly leather were offered, with leather trim continued on the door panels and dashboard. Each 348 Speciale was designated by a sequential production number plate, affixed to the inside of the passenger side door post.

This particular example is #44 of 100 built, and is presented in the most desirable configuration of the Serie Speciale. In addition to being one of 35 tb models built, it is also equipped with the the rare F40 carbon fiber kevlar seats. The car was delivered new to Steve Kessler Motor Cars in New York, and sold to Robert Loss of Pittsford, NY on August 4, 1993. According to service records and mileage logs entered in the owner’s service book accompanying the car, the car has travelled just over 22,200 miles since new. The car was serviced in October 1993 with 2,709 miles and later in December 2000 at Algar Ferrari in Lancaster, PA with 6,104 miles. In December 2003, the car was inspected and serviced in Arlington, VA with 9,415 miles. In 2005, the car was then sold to a new owner in Massachusetts who retained the car until it was sold in 2009 to an owner in California with 16,481 miles recorded when it passed CA emissions inspection.

The current owner purchased the car in 2013 with 17,894 miles recorded. At that time, Ferrari Maserati of Sacramento performed an extensive and highly detailed engine out service (copiously documented invoice totaling over $13,000 included with the car) replacing the camshaft drive belt, tensioner, idler bearing, water pump seal and gasket, adjusting the timing, and performing additional maintenance, replacing all fluids, and installing correct hose clamps and factory alternator drive belt. At this time several electrical and air conditioning components were serviced and repaired as needed. The current owner purchased a new set of rare Speedline wheels, the same ones used on 348 Challenge cars. These were fitted with new Michelin Pilot Super Sport tires and then installed with spacer to give the car an even more aggressive and purposeful stance. The original wheels were retained and are included with the car. Later that year, the car was serviced with 18,550 miles including removing the clutch assembly and installing a new clutch bearing and flange, sealing rings, and Hill Engineering clutch and fluids as needed. In January 2015, a new Optima battery was installed and a new gearbox plug installed. In May 2016, the car was serviced with 21,448 miles including an oil change, multi-point inspection, and minor repairs to various gauges. In 2018, the car received an oil change and a brake service.

Today, this 22,000 mile Speciale presents very nicely overall with very nice original paint, confirmed by digital paint meter readings of 3 to 7 microns. The Rosso Corsa paint is glossy and very well-maintained showing only minor evidence of road use with a few small stone chips along the front edge and air dam. The hood, deck lid, and doors open and shut easily with excellent factory panel gaps and consistent bumper to body fit. The gloss white Speedline wheels are in very good condition with no notable damage to the surfaces or edges. The glass, trim, and body colored accents are all in excellent condition, including the chrome emblems and script and the lower Testarossa inspired door intake strakes. The car currently has door pods without strakes installed, giving the car a purposeful competition aesthetic, while the originals with Testarossa-style strakes are included with the car. The lighting and lenses throughout the car remain in excellent condition as well, showing no significant chips or marks, all of which appear to be original equipment.

The handsome tan leather interior is in nice condition, enhanced by the Connelly leather covered carbon fiber F40 seats. The leather is clean and smooth, showing evidence of use primarily on the left bolster of the driver’s seat and a few minor blemishes. A pair of competition seat belts was installed at Karosserie in Pennsylvania the same specialty shop that performed this work on the Challenge cars in period. Special care was taken to install the belts in the same manner and location as the original Challenge cars received. The dash pad is nicely maintained boasting a clean instrument panel with correct factory features, gated shifter, and matching tan leather unique to the Speciale. The gauges have excellent color and clear lenses, finished off with a beautifully preserved steering wheel. The carpeting and kick-plates are nice with just a few entry marks and evidence of use in the driver’s foot box and on both floor mats. The headliner and door panels are clean, tight, and nicely preserved.

The engine compartment and trunk are likewise nicely maintained with good factory finishes and proper care. The trunk liner and carpet are very clean as are the various original components including the trunk liner, spare tire, and accessories. The engine is clean and properly maintained with factory finishes, preserved engine components, and factory labeled engine bay. When the professional service work and 2013 engine-out service was performed on the car, cosmetic care was maintained under the hood. The chassis appears very clean, free from any structural damage or compromise to the suspension or exhaust. Condition of the undercarriage further supports the mileage recorded on this car.

As one might expect of a lower mileage properly maintained Ferrari, this 348 tb Serie Speciale performs very well. The car is streetable but visceral, with an immediacy and directness that is very different from a standard 348. Steering is incredibly responsive and communicative, with basically no play. There is an eagerness to the way the car responds to all controls that is extremely engaging and rewarding. The car starts instantly and idles with a throaty growl. There is a wonderfully linear, naturally aspirated feel to the powertrain, while braking is responsive and competent, with a firm, high pedal which inspires the driver’s confidence. Visibility is very good, while the low stance and nicely gripping F40 seats truly validate the refinements that the 348 tb Speciale received during development. The steering is magnificent, with a wonderfully communicative and perfectly weighted character. The enormous grip of the Pilot Super Sports allows the car to be driven deceptively quickly for a 25 year old car. With such easy driving manners, stellar performance, and remarkable rarity, one is reminded of the strong value these cars represent particularly when compared to a Porsche 964 RS at more than twice the price.

This 348 TB Speciale is accompanied by a complete set of factory manuals, leather pouch, leather tool case with complete tools, spare belt, tire inflator, and tire pressure guage. The original set of wheels and tires and side strakes are also included with the car as well as a folder with service records dating back 18 years.

With just 35 of the 348 Serie Speciale built in the desirable tb configuration, this rare and desirable car offers exceptional performance in a stunning and uniquely configured factory car. Subtly upgraded to emphasize the already focused personality of the Speciale, this car would be exceptionally difficult to repeat and remains something of an underappreciated modern classic that embodies all of the intoxicating character of the well-established and extremely desirable line of mid-engined special performance Ferraris that continues to this day.