Introduced in 1958, the 250GT Pininfarina Coupe represented Ferrari’s intentions to produce serious road cars, both to showcase proven racing technology, and to meet the growing interest in the North American market. The cars were elegant, understated, and luxurious, available as both open and closed variants. Fitted with the beautiful and powerful 3-litre V-12, the 250 GT became the quintessential classic Ferrari, offering generous space for occupants and luggage, stylish looks, and unrivaled performance.

This particular and uniquely configured car was hand built at the Ferrari factory on 6 November 1958. Finished in Grigio Conchiglia (shell grey) with blue leather interior, the car was specially equipped with a number of features offered for its first owner, Guido Vitale of Wax & Vitale S.p.A. Vitale was the Genovese importer responsible for, among other things, the import of Johnny Walker, Enzo Ferrari’s favorite Scotch. Guido Vitale and Enrico Wax were special customers at Ferrari, as demonstrated by the 410 Superamerica, one-off Bertone-bodied 250 SWB, and two PF Coupes they ordered, all of which were adorned with unique features. This car, (1007GT) is one of two specially built Wax & Vitale 250 PF Coupes, each of which differed significantly from one another.

This 250 GT Speciale (1007GT) was designed and crafted with a number of features, all of which result in a very elegant and refined Ferrari of unique provenance. The front of the car includes unique Ferrari lettering adorned by a beautifully hand-cut prancing horse, replacing the yellow cloisonné badge typically on standard PF coupes. Unique emblems were also placed on the trunk lid, proudly displaying both Ferrari and Pininfarina left and right of the license plate. At the rear of the car, two beautifully contoured exhaust pipe shields shroud the tail pipes, giving a refined and custom finished look to the purposeful exterior. Uniquely designed items were not limited to the exterior of the car however as the interior of the common PF coupe is transformed by the dash, featuring a new central instrument panel with a row of purposeful and elegant knobs, accented by red warning lights, and trimmed with lettered metal nameplates beneath each warning light. The resultant dashboard is both technically sophisticated for the period and delightfully intriguing, particularly against the more traditional Ferrari instruments. Finally, as Ferrari had always been on the forefront of fabrication technology and lightweight materials, this special car was experimentally fitted with both a hood and deck lid molded from glass fiber composites, making it one of Ferrari’s first experimental developments utilizing this highly specialized material.

Vitale retained the car for a brief period after delivery, with it later appearing at the Chicago Motor Show in 1959, courtesy of Luigi Chinetti, who eventually sold the car to a long-term owner, Mr. William Jennings Ryan of Munhall, Pennsylvania. At the time of sale, the car was uniquely equipped with a single 12 plug distributor. A copy of the invoice from DFL Co. in Chicago, showing a price of $14,381.68, is included as part of the extensive documentation accompanying this rare car. Mr. Ryan proudly retained the vehicle for several years, owning it until 1975.

The second owner, Susan de Felice, known to have owned this 250 GT Speciale in the 1990s, showed 1007GT with regularity, including in May of 1995, at the Ferrari Club of America National Concours at Columbus/Mid-Ohio. The car was also shown at the Ferrari Club of America National Concours at Palm Beach in 1993, as well as the Ferrari Concours in Reading, Pennsylvania, Le Belle Macchine d’Italia in Pocono, Pennsylvania, and the Carroll Shelby Concours in Dallas, Texas. In 2005, while in excellent running condition, the car competed in the Ferrari Challenge rally. During this time, the car was presented and regularly tended to by Peter Markowski, whose renowned shop (RPM) comprehensively rebuilt the original engine and oversaw a bare metal repaint. Further work during the early 2000s included Mr. Markowski arranging for the restoration of the interior, replacing the driveshaft, and rebuilding the differential, rear suspension, and braking system. During the engine rebuild, ancillaries were also rebuilt including the starter, generator, water pump, and fuel pump. The clutch was also replaced and the engine dyno tuned while the engine bay and assorted details were refined to a high standard and sorted for performance and reliability.

Since then, the car has belonged to two enthusiasts/collectors on the East Coast and has been thoughtfully maintained with attention to detail, as witnessed by a second place trophy at Cavallino in 2013. In December 2014, the car received some selective paintwork to address a few blemishes in order to maintain a consistent and beautifully presented finish.

Today, this 250GT Speciale makes a very strong visual impression, still showing handsomely despite having been restored some years ago. The paintwork was done to high standards and continues to appear in excellent condition, although a few slight blemishes are evident on the lower portion of the C-pillars as they join the rear fenders. The body is straight and displays good panel fit with only the front portion of the deck lid sitting slightly proud of the deck surface. The chrome, headlights, lenses, and glass are in excellent condition.

The interior is both elegant and properly trimmed, displaying high quality workmanship throughout and a consistently fresh appearance with light evidence of use on the leather seating surfaces. The steering wheel has fantastic patina, pleasantly mellowed, rather than the mirror gloss that typically characterizes freshly restored wood. The gauges and switches are in excellent condition featuring high contrast dial faces, crisp lettering, and correct needles. The unique interior treatment is a delight to both driver and passenger, offering visual interest and vintage appeal to an already timeless interior. Finishing off the interior, the contrasting light grey wool carpets and headliner are in excellent condition, showing only minor wear.

The engine compartment is clean, attractive, and generally correct in its presentation, although a more glossy textured paint has been used for the cam covers. The car is equipped with integrated under hood lights, an unusual feature that may have been part of the car’s unique original specification. Numerous correct details surround the engine and engine compartment including the three eared airbox keepers and correct yellow fuel lines. The single distributor and chrome trimmed fusebox cover are just a few additional unusual features that make up this 250 GT Speciale. The trunk was comprehensively restored in high quality light grey materials to match the interior, with the underside of the trunk lid thoroughly detailed as well. In January, 2015, Italian Car Registry steward John de Boer noted that the chassis plate, engine stamp, timing cover stamp, and numero interno stamp all appear correct, original, and consistent with other Ferrari engines of the period. Mr. deBoer performed a compression check indicating strong compression on all 12 cylinders. Marcel Massini inspected the car as well, describing it as fabulous, authentic, and unusual. A full Massini report is available for interested prospective purchasers. The car is accompanied by documents supporting the restoration, records of ownership, Massini Report, a complete set of tools and tool roll, and correct Borrani spare wheel.

This is an exceptional opportunity to acquire a genuinely unique 250 GT Speciale. An early production car with illustrious history and distinct special features, prepared for a special customer of Ferrari, this car is truly one of a kind. Through expert restoration and continuous care, this exceptional car is ready for any show field, vintage tour, or simply to enjoy for the unique piece of automotive history and exquisite design it represents today. 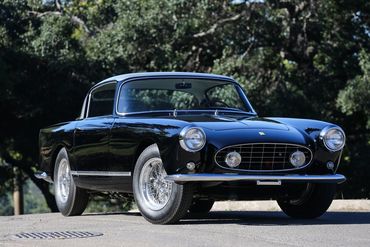