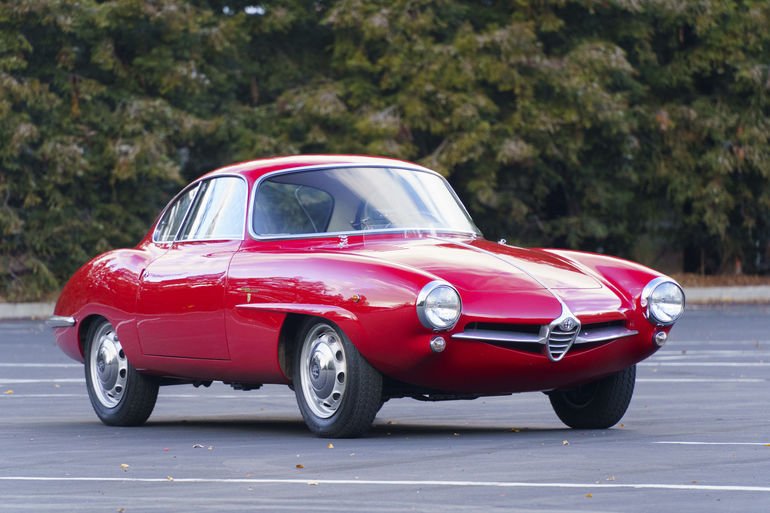 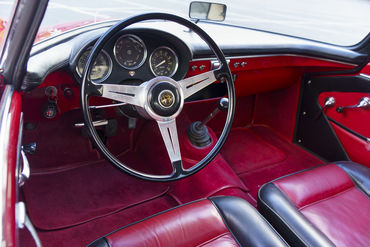 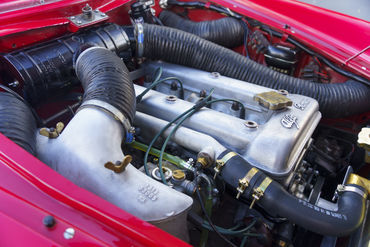 The ground-breaking Alfa Romeo Sprint Speciale (SS) is continually recognized as one of the most advanced production sports car designs of the twentieth century. Designed by the prolific and talented Franco Scaglione while at Bertone, the Sprint Speciale was the result of extensive landmark aerodynamic studies developed around the remarkable B.A.T. 5 and 7 show cars. As Scaglione approached the design of B.A.T. 9 with a more serious regard for production, the Sprint Speciale emerged, becoming the halo car for Alfa Romeo. Although these exceptional cars were intended to be production based, these were among the last specially built hand-crafted cars. Just 1,366 were built by the final year of production in 1966, making them highly desirable today and sought after by collectors worldwide. The first series cars were well resolved, but the later refined 1300 cc engine coupled with desirable twin Weber carburetors, 5-speed transmission, and three shoe front drum brakes made for a very impressive road car with excellent handling and performance characteristics.

The first 100 Sprint Speciales were built using the unique front profile and sleek downward facing front grille, earning the distinction of “Low Nose” Sprint Speciale. As these first 100 cars were needed to homologate per FIA regulations, all were built with the earlier Low Nose design configuration. The first ten or so cars of the Low Nose version were constructed with all aluminum coachwork, while the remaining approximately 90 Low Nose cars were assembled using steel bodies with aluminum doors, hood, and trunk. Other traits of Low Nose cars include a floating trunk lid (later series cars had a trailing trunk lid that opened at the kamm tail edge), thin corner bumpers, and no front bumper.

Though Low Nose Speciales are generally regarded to have been built in the first 100 cars of the production sequence, this example, 00433, is sequenced outside the original 100 Low Nose cars, but contains major body design elements of earlier production Low Nose Speciales. Centro Documentazione Alfa Romeo has supplied a letter verifying this car with production date February 15, 1961, and delivery date February 22, 1961. Finished in Rosso Alfa and delivered to Lugano, Switzerland, it is conceivable that a wealthy Swiss customer approached Alfa Romeo with the request to have their car constructed using the Low Nose body design from earlier production. Although no documentation accompanies the car to support historic references to factory coachwork performed after the first 100 Low Nose cars, the coachwork on this car inspires experts to once again consider the handmade nature of these cars and the often discretely commissioned requests suggested by privileged clientele.

According to the current consigning owner, he purchased this car from a private party approximately fifteen years ago in Dusseldorf, Germany. At that time the cosmetic condition of the car was consistent with a recently completed restoration, and that the car had spent time in Belgium under the care of an Alfa Romeo specialist. Under current ownership this Sprint Speciale has benefited from recent services performed by Alfa Romeo expert Jeff Greenfield in Massachusetts. Invoices under current ownership include January 2019 when the head was removed, sent out for machine work, valve guides and stem seals replaced, new valve seats and new exhaust valves installed, cam regrind, and resurfacing for the cam followers. In 2021 the engine was rebuilt, a new clutch installed, carburetors overhauled, the gas tank repaired and refinished, and a new fuel level sender installed. Work at this time also included flywheel resurfacing, crankshaft polishing, installation of a rebuilt water pump, engine machining, new pistons and liner set, new clutch pressure plate, and numerous additional items totaling over $14,000. In September 2022, the master brake cylinder was rebuilt, a new brake light switch installed, new emergency brake cable fitted, two new front wheel brake cylinders installed, and two new hard brake lines fitted at the front.

Today this handsome Sprint Speciale exhibits lustrous vivid red paint which is smoothly applied throughout the contoured surfaces. The reflection lines and excellent panel fit are very well presented. There are two crease lines along each side of the forward surface of the front fenders approximately 4” in length. Visible on close examination, these two marks are attributed to garage parking errors. The chromed headlight bezels bear the stamped Carello lettering, the gold front fender script and Bertone badge are fine accent features, and the louvered aluminum hood is trimmed with a plexiglass bug screen evoking Alfa Romeo’s racing lineage. A set of correctly sized stamped steel wheels are finished with satin silver, shod with new Vredestein Classic tires, and capped with beautifully polished wheel covers. The Low Nose grille, and polished trim are in very good condition including the delicate polished alloy center spear on the hood. Much of the original glass is still in place contributing to the elegant and dramatic Scaglione body design.

The interior is finished in contrasting black and red leather accented by red carpeting. The steering wheel and instruments offer excellent color and clarity to the instrument faces and the dashboard is finished with a black leather upper and painted red lower fascia. The delicate chrome knobs, switches, and ashtray deliver delightful glints of jewelry further punctuating this elegant and sporty interior. The quality of the interior is consistent with an older restoration that has aged well over time. Finishes continue into the rear red carpeted panel, an ivory headliner, and two-tone door pocket details. The trunk compartment houses a matching spare tire, held in place with an alloy tie-down handle.
Under the aluminum hood, the engine compartment features correct details and a nicely finished twin-carbureted overhead cam engine showing mostly correct components, correct factory finishes, proper hardware, wiring, and factory hoses. The cast aluminum intake plenum is properly ducted, with correct satin large black diameter hoses and a correct F.I.S.P.A. air cleaner housing, which feeds air to the twin Weber carburetors. The engine and engine compartment are clean and tidy bearing cowl stampings reflecting the chassis number verified by Alfa Romeo.

The underside of the car has been maintained and shows no visual evidence of structural compromise. The exhaust, replaced in 2008 using correct original type components, still bearing the manufacturers paper labels. Although not detailed or prepared for show, the suspension, brake components, and casting finishes appear to be in very good condition.

This Sprint Speciale is accompanied by a set of tools in a tool roll, a set of wiper blades and arms, and two Alfa Romeo instruction and service books.

Stunning design and performance are united in perfect harmony in this exquisitely restored Alfa Romeo Sprint Speciale. Historically significant, beautifully designed, and a unique part of Alfa Romeo’s history, this rare Low Nose configuration Sprint Speciale is ready for show, enjoyable driving, or simply to admire as one of the most innovative and beautifully designed sports cars ever created. 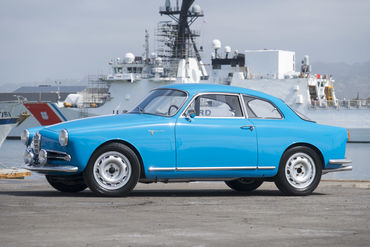 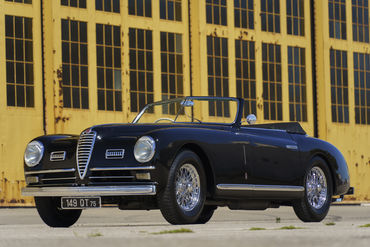 Exceptional provenance including 56 years of single prior ownership. Matching numbers example with extensive... 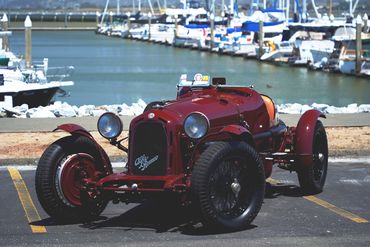