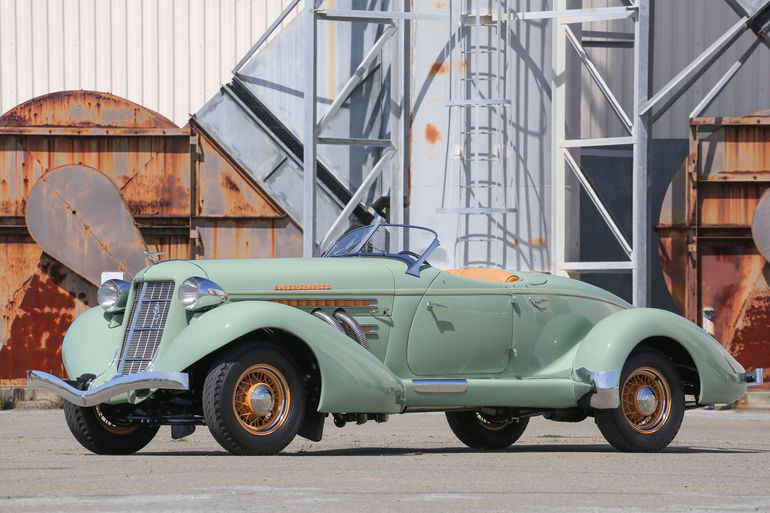 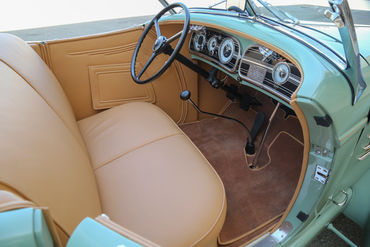 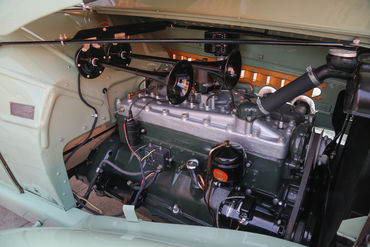 Among the most coveted and beautifully conceived automobiles of the Streamlined Art Deco era, the 1935 Auburn Model 851 Supercharged Boattail Speedster remains at the forefront of streamlined American designs. Originally built with the finest craftsmanship and design, the Auburn Speedster stands in a class by itself, in part because it was the final offering from one of the greatest American automobile companies to ever assemble speed, power, and performance in a car with such commanding presence.

Only a year earlier as the Auburn Cord Duesenberg company had shifted interests towards aviation and shipbuilding, the company was crippling under the financial pressures of The Great Depression. Just three years after increasing its dealer network and sales to record levels, the company’s fortunes had reversed to the point that it could no longer produce the more profitable offerings needed to sustain the higher end models.
Duesenberg President Harold Ames, Design Chief Gordon Buehrig and Chief Engineer Augie Duesenberg were assigned the task of producing a new supercharged speedster to boost Auburn’s image and attract new buyers to its stalled showrooms. Having already designed the amazing Cord 810, Buehrig still had a great deal to offer for the Auburn line. Working with cost limitations and engineering challenges, Buehrig worked with the existing chassis, cleverly suspending streamlined pontoon fenders flanking a tailored boat tail, with a distinctive streamlined grille shell and softened body lines. The results were visually unique yet classic. The new Speedster was handsomely proportioned, delivering classic lines with a sporting flavor. The long, low hood line and raked V-shaped windscreen delivered an impressive profile, particularly with the sweeping Boattail rear and chromed exhaust pipes exiting from the driver’s side engine cover.

Period racer and motorsport celebrity, Ab Jenkins test drove each completed car in excess of 100 mph, commemorated with a plaque showing the speed achieved for every car prior to delivery. Celebrated to great acclaim, but too late to save the company, the Auburn Speedster became a final statement of streamlined sporting performance culminating an era offering the finest in technology and speed, contained in one of the most stunning automobiles of the pre-war era.

According to the current owner, period records and photos accompanying this Auburn Speedster detail this example to have been owned by pioneering Auburn collector Ray Distol who reportedly acquired the car in the early 1950s. Distol displayed the car at various events, including early Auburn Cord Duesenberg (ACD) gatherings in California where the car was photographed. During this period, the car wore black and yellow California license plates and was titled and registered in California. The photographs and written summaries accompanying the sale indicate Distol owned this Auburn for more than 30 years until the car became the property of well-known collector Archie Burton. Burton retained the car for approximately ten years, embarking on a restoration, sadly halted by his untimely passing. In 2010, the Burton estate sold the car to Auburn restoration specialist Lon Krueger. At the time of purchase, Krueger was able to inspect all the parts, engine, and body panels verifying the originality of the body, chassis, and major mechanical components. Krueger’s knowledge in Auburn restoration includes multiple Auburn ownership, the restoration of five Speedsters, numerous top concours wins, and long-term ownership/operation of Sun Valley Classics, a restoration facility specializing in prewar classic cars. In 2015, Kreuger completed the restoration on this Auburn Speedster and arranged for it to be on display at the Blackhawk Museum, Danville, CA. Shortly after, the consigning owner purchased the car. Prior to sale, Krueger had the car returned to him where he spent additional time refining some mechanical and cosmetic aspects of the car to ensure that it would represent his reputation for excellence.

Among the many important features of this example, this Auburn Speedster is one of approximately 125 cars built during the two final years of Auburn production. Having been documented by noted Auburn Cord Duesenberg historian and specialist Randy Ema, this factory supercharged Speedster retains the correct matching numbers engine, correct supercharger, correct numbered chassis which matches the cowl tag, and the original (not reproduction) Ab Jenkins speed plaque. A collector of numerous Auburn artifacts and literature, Krueger selected from the many optional color chips Auburn offered and finished the car with one of the most beautiful Auburn factory designations; Swiss Green and Caramel Beige.

Today the car presents as a beautiful example of this iconic design. The stunning Lon Krueger restoration combines both mechanical excellence and superlative finishes, having traveled a mere 39 miles since the restoration was completed. The fascinating and beautifully delineated coachwork is not only evident in the exquisite design, but also in the refined craftsmanship imparted during restoration. The all steel factory coachwork is finished with gorgeous period correct paint colors, accented by painted wire wheels, dual pin stripes, hood vents, and Supercharged script, delivering an elegant presence to this rare car. The fluid fenders and recessed running boards create a wide stance amidst the tightly tailored boattail body. Adorned with just a few hints of brightwork in key featured areas, the plated parts are impeccably polished to a high luster. The stunning laser straight grille lines, flying hood ornament, and beautifully polished headlamps are individual pieces of jeweled excellence. The car sits on appropriately sized blackwall tires with fitting robust tread typical of cars in this sporting era, eschewing the more commonly seen “gadabout” whitewall tires that often distract from the rightful sporting heritage.

The interior is nothing short of breathtaking, revealing the finest leather upholstery, correct carpeting, and exquisite Art Deco dual dash-panel designs. Tastefully and accurately restored to the highest standards by experts in the field, one need only look closely at the colorful instrument dials, the fluid perimeter coach trim, or the finely stitched door panels to see the superlative craftsmanship revealed in this refined and elegant interior. Truly a Speedster in the most enjoyable sense, the smooth rear cowl, raked and lowered windscreen, contoured door sills with no side glass, and two-seat configuration are perfectly executed with style and once again, exceptional care in restoration. The lasting impression this car delivers is one of power and grace - a fitting tribute to the achievement in original construction and captivating engineering, commandingly delivered with modern restoration artisanship.

Lifting the centrally hinged hood, each side of the potent Supercharged inline eight-cylinder engine is a delight of correct finishes, casting excellence, and engineering simplicity from an era that delivered prestige with durability. The engine has a beautiful and refined presence enhanced by mechanical details, copper lines, and properly painted components, all of which come together a clean and refined engine reflective of only post-restoration test and running miles. Even correct and original style color coded, lacquer coated, woven fabric electrical wiring has been used throughout the electrical wiring. The beautifully shrouded flexible stainless-steel exhaust side of the engine delivers a flowing contrast against the circular supercharger and downdraft carburetor. Handsomely restored and consistently finished throughout the cowl, inner side panels, and front frame rails, the engine compartment conveys the integrity representative of a comprehensively restored car worthy of any top level concours or museum display.

The car starts easily and delivers a wonderfully smooth idle, which opens up slightly to reveal the distinctive supercharger whir as you give the car a bit more throttle. Easing into gear, this impressive automobile pulls very well from a stopping position, shifting into second gear as steering lightens up a bit and the supercharger encourages your throttle. Once underway, the ride is quite rewarding and sporting. Sitting in the middle of a car with such grand presence, you might expect the ride to be heavy or slightly lumbering. Not so, as the lower seating position, ample power, and dramatic windshield rake make you quickly forget the scale of this car. For those unfamiliar with prewar cars, braking and gear selection will take some practice, but once familiarized, the resultant driving experience is unparalleled in an American classic, delivering the sights and sounds of vintage excellence with a dash of Gatsby class.

The underside of the car is further evidence of the finest in restoration quality and finishes. There is almost no sign of use since the restoration was completed and certainly no evidence of structural compromise on any of the frame or suspension components, body work, or drivetrain. Everything about the visual condition of the car reflects the 39 miles shown in the odometer, which was zeroed out when the restoration was completed. In addition to the period records and photos accompanying this Auburn Speedster (in the car of the current owner) are in-process restoration photos, several preserved dash plaques, and extra serial number plates.

Great cars from the Streamlined Art Deco era are more and more becoming cherished objects of art with new generations of followers rapidly realizing how much these fantastic cars with superlative restorations can be captivating examples for show or enjoyable use. This stunningly restored Supercharged Auburn Speedster delivers not only an impressive and innovative design built on a stout chassis with a powerful engine, it offers the next owner a unique opportunity to experience open touring in a uniquely designed American classic reflecting the finest in automotive history.