The Porsche 911 was revealed at the Frankfurt Motor Show in the fall of 1963. Developed as a replacement for the highly successful 356, the 911 arrived with more power, more comfort, and was favorably priced against comparable cars. The 911 became the darling of the automotive press, and rightly so. Performance and sales were brisk, with figures that vastly surpassed the 356. Over time, Porsche executed steady improvements in comfort and performance, enhancing what was rapidly becoming an iconic sports car. In September 1969, Porsche released the 2.2L C-Series Model 911 for the 1970 model year. Refinements included lengthening the wheelbase by 2.4 inches, flaring the front and rear fenders to accommodate wider wheels and tires, upgrading the heating and ventilating systems, and numerous other interior and exterior improvements.

For the 911S, the engine enhancements included a re-profiled camshaft, larger valves, better porting, higher compression and fuel-injection. This resulted in 30 more horsepower for a total 180 horsepower and 199 lb. ft. torque. Chassis upgrades included a rear anti-roll bar, Koni shocks and 11” ventilated disc brakes, which replaced the standard solid rotors. For the S model, special gear ratios were installed in the five-speed transmission including an overdrive in 5th gear. To further lighten the car, all S models were fitted with a lightweight aluminum engine lid. Desirable in period for their performance qualities, the added cost for the S model deterred many prospective owners, resulting in just 1,744 1970 911S models constructed by Porsche; creating yet another reason for ongoing enthusiast and collector interest in these rare cars today.

This two-owner, California based 911S is a solid, honest original example, ready to undergo either a sensitive restoration or offered as a fantastic candidate for an R Groupe/RS clone, or as an excellent starting point for a personalized 911 done to an enthusiast’s “dream” specifications. According to the original maintenance record book filled out by the first owner, the first owner was a resident of Oakland, CA. The most recent owner, also a resident of Northern California, is reported to have purchased the car in 1971, as indicated by the title assigned in his name in 1971. The Porsche factory maintenance book shows the first owner named in the book, then crossed out with the second (current) owner having written his name below, further indicating his second ownership of this rare 911S. The current owner used the car regularly throughout his nearly 50 years of ownership, servicing it as needed, indicated by a large stack of receipts documenting more recent repairs and maintenance. In August 2018, the car was sent to an independent Porsche specialist when the owner complained of poor running conditions. Upon examination, the oil was drained, and the oil sump was removed to facilitate a borescope inspection. It was revealed that the oil pump gear was not turning and thus recommended that the car not be driven in order to prevent potential engine failure. The crankcase was filled with fresh oil, the engine closed up, and the car returned home where it has been safely stored for the past two years.

During the current ownership the car was repainted a correct shade of blue, matching the original factory color. At some point, the original engine case (#6300168) was replaced with engine case #6105851, which, according to Porsche numeric factory records is attributed to a 911T. The top portion of the engine including the rare mechanical S type fuel-injection unit remains in place and appears to be original.

Today this 911S presents essentially as a complete and well-preserved survivor having benefited from California climate, long-term ownership, while showing no significant modifications or structural damage. The paint, now older and showing signs of fading in some areas, various road chips, and minor scuffs, was completed to good standards at the time and certainly would respond well to professional paint detailing and correction to yield a very presentable finish. All panels open and shut as expected, displaying consistent dimensions and correct factory fit with no visible signs of rust or damage. Both the front and rear bumpers are in good shape showing no significant damage and good rubber trim. The exterior emblems and trim are in good condition, with most of the stainless trim in need of polish due to minor light scratching on the window frames, heavier scratches on the rear quarter window trim, and fading to the side view mirrors. The lights, lenses, and glass are in very good condition with good gloss, clarity, and coloring with minor yellowing on the headlight scoops. The side glass appears to be original as evidenced by the original glass markings. The rubber trim and weather-stripping are in good condition, with the door rubber exhibiting signs of wear typical for unrestored cars of this age. The Fuchs wheels are nicely preserved and very likely would detail to an excellent finish as they appear to have no significant marks or excessive curb rash. The tires are dated 2005 and tread is essentially to the wear bars, but all four tires still hold air, thus suitable for temporary use.

The interior appears to be essentially original and while in need of cosmetic attention, very serviceable as is. The driver’s seat cover has some seams beginning to split and typical inner foam collapsing, but the materials overall are generally sound. The dash and console has been preserved, though the top of the dashboard has a crack along the mid-section. The instruments, dial faces, and needles are in generally good to very good visual condition. None of the instruments have been tested for function at this time. The inner door panels are in good condition with straight boards and good boxes, but one crank handle will need to be replaced. The headliner, while not sagging or torn, does have minor stains and the carpeting which is generally good in the rear section, shows typical wear in the front footwells.

The engine compartment and trunk are both tidy and unrestored, reflecting a car that has certainly been used but properly cared for. The engine appears complete with the original type 911 S mechanical fuel-injection and components in place showing faded but correct factory finishes and appropriate fittings. The various engine components appear correct as does the engine compartment details and most importantly, the engine compartment is still fitted with the rare 911 S aluminum engine lid. The undercarriage is typical of an unrestored car that has been used regularly, showing minor wear from the elements and some pan scuffs, but very solid suspension boasting factory correct structural mounts. Having benefited from factory undercoating, the underside has a solid visual appearance, with no visual evidence of structural damage, and components that appear consistent with Porsche specifications. The forward compartment appears original with no notable damage to the structure and, as this was a factory undercoated car, evidence of proper factory undercoating is still visible in several areas.

Included with the sale is a 2” stack of service records and maintenance dating back many years, the original owner’s red vinyl folio including the owner’s manual and maintenance record, a jack, spare tire with matching Fuchs rim, and a set of tools with a correct tool roll.

The Porsche 911S is regarded by many as the holy grail of Porsche road cars. Restored examples rarely change hands, few of which are the highly desirable 1970 model year. With so many of these legendary cars having been modified, structurally compromised, or ravaged beyond restoration, it is both refreshing and inspiring to see such a complete, original, and worthy candidate awaiting passionate craftsmen to apply their skills. For an enthusiast who seeks the pleasure and satisfaction of restoring a rare 911S, this preserved example is ready to be transformed by an admirable restoration, revived as an adventurous RS clone, as a personally tuned performance sports car emblematic of the daring and celebrated Emory, Singer, or Walker variations performed on the iconic 911. 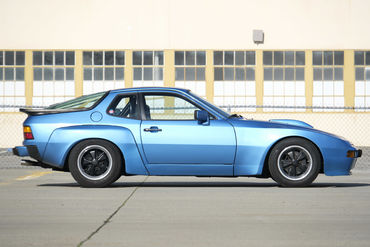